Studies show, at its best, politics can be a civilizing activity that preserves the peace, protects human rights, advances economic well-being and encourages excellence in the arts and sciences. At its worst, however, politics—particularly for those on the losing side of the struggle for power—makes for war, tyranny, economic ruin and barbarism. 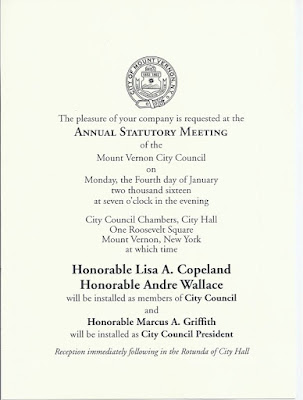 As we prepare for the transfer of power in administration in the City of Mount Vernon government, we see what we thought was best (the removal of Ernie Davis from the mayoral seat) turn out to be the worst (the new Thomas administration taking over) as a classic model of be-careful-what-you-wish-for-because-you-just-might-get-it. Sometimes you need to consider the implications.

While the citizens of Mt. Vernon desperately wanted change, in the excitement of achieving that change by any means necessary, we didn’t stop long enough to examine exactly what that change would look like. Candidates will tell you anything to get your vote, posed as that picture perfect portrait of what you are looking for, just long enough to get elected. Once elected, certain patterns begin to emerge which are known as political games.

In the nine weeks following the general election to the swearing-in of the new administration we have experienced a heighten sense of politricks-as-usual from the Thomas Administration before he even got into office.

One-after-another, horrific glances into a frightful future, a preview if you will of what his administration will look like have residents concerned about the slippery slope – cumulative effect from one event setting off a chain of events, that will continue the downward spiral this city has been going in for over a decade. Only faster and deeper down the rabbit hole than ever before.

We asked for change and we got it. Unfortunately for the residents of Mount Vernon, it is a change for the worst. The younger, smarter, more educated Mayor is proving before he gets in office he may be even more slippery and slimy than all of his predecessors combined. When you look at what this city has been through that says a lot.

We were desperate to find that bright light at the end of the tunnel. Just when we thought we had found it, we’re starting to realize that light isn’t coming from the end of the tunnel, but from a powerful potentially poisonous train coming straight at us full steam ahead.

After reports of financial indiscretions, before, during and after the campaign, the lack of loyalty, turning his back on those who helped him get elected and the shaking down other candidates, just to name a few selected tracks from Thomas hit-list, just when we thought things were getting quiet, the elected officials and community leaders were going to work together, it turns out to be just the calm before the storm. January 1st, a storm a coming, like Hurricane Sandy was the deadliest and most destructive in the area, Hurricane Thomas promises to be even more destructive.

As the city tries to unite and allow the new Mayor to take office and settle in, he once again shows he can’t be trusted, even when it comes to the swearing-in process. Reaching out to Councilman Elect Andre Wallace to shakes hands and take a unifying selfie to be shared on social media as a sign of togetherness. Thomas ask Wallace to have his swearing-in with him, instead of at separate events. The Councilman Elects agrees only to see an email blast from Friends of Richard Thomas advertising the swearing-in of Richard William Thomas, nowhere is the councilman elect’s name.

So Wallace decides to do his own thing and after Wallace and Councilwomen Elect Lisa Copeland agree to be sworn in at the annual statutory meeting. Once flyers and emails go out, overshadowing the announcement of Thomas’ swearing-in, he reaches back out to Wallace once again asking him to join him. This time he entices and tricks Wallace by saying Lisa Copeland has already agreed. Hesitantly, not to come off as not being a team player, Wallace agrees. Only to find out Copeland was never asked to participate in the function and had no knowledge of her swearing-in with Thomas.

Back to the slippery slope quote. If Thomas’ fellow elected officials can not trust him and find themselves on the opposite end of his decievery and trickery, then how can we the residents of Mount Vernon trust this man. I am speaking from someone who played an integral part in his campaign and is still very active in his camp, becoming more and more disappointed by the moment of his actions of late. The appointment of Kelly was the icing on the cake. Just when other elected officials decide for the sake of the city, to give unity a chance, Tall-Tale-Telling-Thomas strikes again.

Just like the tale of The Scorpion and the Frog, you know the animal fable that first emerged in 1954. Where a scorpion asks a frog to carry it across a river. The frog hesitates, afraid of being stung, but the scorpion argues that if it did so, they would both drown. Considering this, the frog agrees, but midway across the river the scorpion does indeed sting the frog, dooming them both. When the frog asks the scorpion why, the scorpion replies that it was in its nature to do so.

The fable is used to illustrate that fundamentally vicious natures cannot change. To show if Thomas is showing his true colors as a deceitful, unethical, untrustworthy, not very loyal, morally bankrupt individual during the end of his campaign and then eight and half weeks going into taken office, fundamentally how can we expect him to change. Sure he promises not to sting us, because we both will drown, but like the scorpion it’s in his nature to sting us.

– Mr. Smith…representing frustrated residents and taxpayers of Mount Vernon
(of course that is not my real name by since I will be working closely with Mayor Thomas, I will remain anonymous, but had to get this out there)

3 Comments on Letter To The Editor: Richard Thomas – Tales Of The Scorpion